Martha was recognized as one of “America’s Most Amazing Women” by Country Woman Magazine for fighting for farmers rights across the nation.

The Virginia General Assembly, honored Martha Boneta with a Joint Commendation from both the House and the Senate recognizing Martha for her significant contributions to the Commonwealth.

Martha was awarded “Unsung Hero” by CRTV in 2018 for fighting back against burdensome over regulation. In 2019, Martha was chosen as the featured cover story of Christian Times Magazine and later asked to join CTM as an editor.

Martha has two bills named after her in the oldest legislative body in the nation, The “Boneta Bills” I & II that protect property rights and cut burdensome red tape and over regulation on the farm.

Martha is also the subject of a documentary film “Farming in Fear” that received the People’s Choice Award and Anthem Film Festival and numerous other awards and recognitions. This documentary film is screened in universities across the nation.

Martha was appointed as the Executive Vice President of Citizens for the Republic (CFTR), founded by Ronald Reagan in 1977 to relaunch CFTR in 2017 with several veterans of the Reagan Administration.

Martha is on the Board of Directors for various organizations including, America Winning Coalition, The Trump Pence Agriculture Advisory Board, KVB and numerous others across the country. Martha has also been appointed on several advisory boards and is Co-Chair of the Trump-Pence 2A Coalition.

Immediately following law school, Martha worked in government relations and advocacy in Washington, DC that propelled her career at Reed Elsevier for the Mid-Atlantic Region and Thomson Reuters and launched her in to the public policy arena.

Martha Boneta is a frequent co-host on several radio talk shows and contributes to various media shows and is also a co-owner of a media network.

Martha also attended the Strauss Institute at Pepperdine University School of Law in Malibu, where she studied Alternative Dispute Resolution.

Martha is the founder and President of Victory Coalition Strategies, LLC. representing corporations, individuals, non-profits and organizations around the world. Martha is also the Chairman of Vote America First.

Martha has been a Principal at Capital Keys, regarded as one of Washington, D.C.’s top public affairs firms and a Senior Policy Advisor to America First Policies.

Today, Martha speaks all over the country to corporations, universities, business communities, political organizations and many other entities. 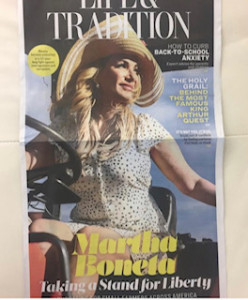